A mouse’s house may ruin experiments 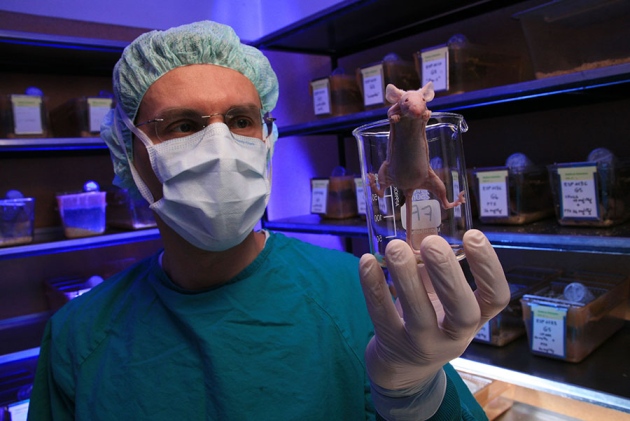 It’s no secret that therapies that look promising in mice rarely work in people. But too often, experimental treatments that succeed in one mouse population do not even work in other mice, suggesting that many rodent studies may be flawed from the start.

“We say mice are simpler, but I think the problem is deeper than that,” says Caroline Zeiss, a veterinary neuropathologist at Yale University in New Haven, Connecticut. Researchers rarely report on subtle environmental factors such as their mice’s food, bedding or exposure to light; as a result, conditions vary widely across labs despite an enormous body of research showing that these factors can significantly affect the animals’ biology.

“It’s sort of surprising how many people are surprised by the extent of the variation” between mice that receive different care, says Cory Brayton, a pathologist at Johns Hopkins University in Baltimore, Maryland. At a meeting on mouse models at the Wellcome Genome Campus in Hinxton, UK, on 9–11 February, she and others explored the many biological factors that prevent mouse studies from being reproduced.

Christopher Colwell, a neuroscientist at the University of California, Los Angeles, has first-hand experience with these issues. He and a colleague studied autism in the same genetically modified mouse line, but obtained different results on the same behaviour tests. Eventually they worked out why: Colwell, who studies circadian rhythms, keeps his mice dark in the daytime to trick their body clocks into thinking day is night, so that the nocturnal animals are more alert when tested during the day. His colleague does not.

Colwell notes that disregarding mouse circadian rhythms could bias many behaviour experiments. Most humans would not perform well on social and cognitive tests either if made to do them in the middle of the night, he adds.

You are what you eat

Nutrition can also determine whether a mouse study succeeds or fails, yet Brayton says that many researchers cannot even say where their animals’ feed comes from. Some mouse foods contain oestrogens and endocrine-disrupting chemicals that can affect research on cancer, among other diseases1. And the high-fat, high-sugar food used in obesity studies goes rancid quickly; when it does, mice may stop eating and lose weight without researchers realizing why.

Food choices can also alter a mouse’s gut microbiome. Catherine Hagan Gillespie, a veterinary pathologist at the Jackson Laboratory in Sacramento, California, has found that species of bacteria in the gut vary widely between mice from different vendors2. In another, unpublished, study, she found that mice with different assortments of gut bacteria showed different anxiety levels in behavioural tests.

But few behavioural scientists think about running microbiology assessments, says Hagan Gillespie. Even when they do, the extra work involved can increase the complexity and cost of the study. Yet the mouse microbiome is sensitive to a wide array of factors, such as air quality, maternal stress and immune function.

Differences in the gut microbiome may explain why mice with the same genetic mutation can have different characteristics, or phenotypes, says George Weinstock, associate director for microbial genomics at the Jackson Lab’s site in Farmington, Connecticut. Jackson Lab, which breeds and supplies mice for use in studies around the world, tightly controls factors such as the type and quantity of food and the pH of water that animals receive. Even so, it finds differences between the mice at its three sites. Weinstock says that the company has begun researching ways to standardize its customers’ experiments by providing special food and care instructions for the mice that it provides.

But even when improved mice and food are available, some researchers resist using them out of concern that it will affect their results, says Graham Tobin, former technical director of the mouse-diet vendor Teklad in Alconbury, UK. Yet he argues that standardizing results across labs is worth this inconvenience to individual scientists. Tobin also notes that researchers rarely resist adopting other new technologies — such as improved DNA sequencers — that can throw older data into question.

Zeiss says that the competitive nature of science might increase researchers’ resistance to changing how they consider animals in research design. If scientists have to treat their animals at the right point in the experiment, analyse both clinical and biomarker changes, include old mice and both sexes to ensure that results are representative of broad populations, and control environmental variables, each experiment will take much longer and they’re probably not going to be able to publish as much, she says.

The US National Institutes of Health (NIH) has taken steps to address some of these problems. Some of its institutes require certain animal trials to be replicated before a therapy can move into clinical trials, but the NIH says that it has no plans to require this agency-wide. And in 2014, the NIH began requiring researchers to include female animals in studies, and started to give out supplementary grants to researchers who complained about the cost. But the agency has not issued any specific grants or supplements to study other confounding factors.

That is disappointing to those who would like to see researchers control — or at least report — factors such as the strain of mice used and the type of environment they are raised in. This would allow researchers to perform metanalyses of published literature that could identify any confounding factors. “The information and the wisdom is out there,” says Zeiss, “but studies get funded without necessarily a lot of attention to that.”